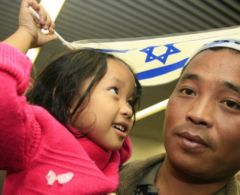 All this might not ring a bell with a reader of the Bible. And yet, what if it should turn out that the “rich, fertile land” of the sons of Manmasi was none other than the Land of Israel, and that Manmasi himself was the biblical Menashe, son of Joseph and grandson of Jacob, after whom one of the twelve biblical tribes was named? As improbable as it may seem, this is very likely the case, because there are many other improbable things in Kuki-Chin-Mizo culture. Such as, for instance, ancient lineage chants containing the names of Jacob, of Menashe’s grandson Gilead, and of Gilead’s grandson Ulam. Or clear indications of the past practice of circumcision, in a geographical area where no one else practiced it. Or a demonstrably ancient song about crossing a body of water whose descriptions have a remarkable likeness to the story of the splitting of the Red Sea in the book the Exodus. Or being one of two people on earth to have had a holiday of unleavened bread on which no yeast products were allowed to be eaten. There are too many uncanny resemblances of this sort between Jewish and Kuki-Chin-Mizo traditions to be ascribed to mere coincidence. Some connection between the two peoples must exist.

How, and when, could descendants of the tribe of Menashe have reached northeast India? Although one can only speculate, one’s starting point must be the conquest, nearly 3,000 years ago, of the northern Israelite kingdom of Samaria by the Assyrians, who exiled parts of its ten tribes, one of which was the tribe of Menashe. The exiles were sent eastward to the far borders of the Assyrian empire, after which their traces disappeared, leaving behind the tantalizing legend of the “Ten Lost Tribes.” Yet a party of them, so it seems, continued to wander further and further to the east, taking centuries or millennia to complete their long trek until they reached the sparsely inhabited foothills of the Himalayas. There they settled down, blended with the local population, and adopted many of its beliefs and practices while transmitting a number of their own. They retained some of their ancient memories and lost many others, no longer aware of where the “rich, fertile land” they came from was, or of their connection to the Jewish people – of whose very existence, indeed, they had no inkling.

All this changed in the late 19th century with the arrival in the area of the British and their missionaries. The latter soon convinced the various Kuki-Chin-Mizo tribes to exchange their native religion for Christianity, and within several generations the local population was almost completely Christianized. Yet, at this point, an unexpected development took place. The missionaries introduced the Bible and, as the recently converted Christians of northeast India became acquainted with the Hebrew scriptures, some began to say, “Just a minute! There’s something strange here. We know this particular story. We know this particular law. All this should be new to us – but some of it isn’t.”

And so, starting in the 1950s, the belief began to spread among the Kuki-Chin-Mizo that their forefather Manmasi was the biblical Menashe and that they were descended from the Israelite tribe bearing his name. At first this belief shook no one’s faith in Christianity: it was no dishonor, after all, for a Christian to come from the people into which the Christian savior had been born. Yet, as far back as the 1970s, small groups began to rebel: if their ancestors were Israelites, they argued, they should be living by the tenets of biblical Judaism, not by those of Christianity. Entirely on their own, without even realizing that a Jewish people still existed, much less that it had continued to practice Judaism to this day and had established the state of Israel in the “rich, fertile land” of legend, these groups left the Christian church and sought to live by the laws of the Hebrew Bible.

This stage lasted last only a few years. Soon the Judaizers discovered to their astonishment that there were Jews elsewhere in the world and even a Jewish state. Their first attempts to contact the Israeli government met with no response. Then, one of their letters came into the possession of Rabbi Eliyahu Avichayil of Jerusalem, a prominent researcher of “lost” and crypto-Jewish groups. In the early 1980s he traveled to India, met with the leaders of the Judaizing community, now calling itself the Bnei Menashe, and was persuaded both of the fervency of their beliefs and of the historical truth of their claims. Founding an organization of his own, Amishav or “My People Returneth,” he began traveling to India regularly, teaching the Bnei Menashe the fundamentals of modern Judaism, and bringing them to Israel. By the year 2000, some 400 of them had made the move.

Today, some 2000 Bnei Menashe live in Israel and another 3000 are still waiting patiently to come. The gates of the country have not always been open to them. Although they are eager to undergo the halachic conversion required of them by the Israeli Chief Rabbinate, there are no rabbis in India to convert them, which has meant their coming to Israel on tourist visas and attending a comprehensive conversion course; only after its completion are they officially recognized as Jews and granted the Israeli citizenship that makes them eligible for various forms of state assistance to new immigrants. A process that few of them can afford to pay for, this has depended on the support of private organizations and donors and there has been opposition to their immigration from various quarters. Yet, a turning point came in 2005, when Israel’s Sephardic Chief Rabbi of Israel, Shlomo Amar, concluded a two-year investigation by ruling that the Bnei Menashe were indeed a branch of ancient Israel and must be aided in their return to the Jewish people.

Jewish history is full of remarkable chapters. The “Ingathering of the Exiles,” the return to Israel of Jews from far-flung and little-known regions – places like Kurdistan, Yemen, the western and southern coasts of India, and Ethiopia – has been one of the most outstanding of these. Yet, never have exiles returned from so far away in space and time as have the Bnei Menashe of the Indian-Burmese borderlands, after being separated by 2,700 years and thousands of kilometers from their brethren. Their story can send a chill down any spine. It is an extraordinary testimony to the tenacity of collective memory and group identity, which have overcome nearly three millennia of isolation to reunite a people with its brethren and its past.